India is considering developing and using a chat application similar to WhatsApp and other homegrown secure communication networks, at least for government agencies, to insulate the country from future vulnerabilities stemming from geopolitical developments, two officials said.

A senior government official told ET that the way US companies such as Google and Qualcomm are preparing to cut ties with Huawei following Washington’s sanctions against the Chinese company has set alarm bells ringing in New Delhi.

“There are strong discussions that for strategic and security reasons, over a period of time, we should have email, messaging…all sorts of systems, at least for government communication, which doesn’t depend on outside players,” the official said on condition of anonymity. “We need to make our communication insular.”

The official said there were ongoing discussions that any official communication must happen over secure and indigenously developed networks. “We should have some form of a sarkari WhatsApp.”

The thinking in the government is that all communication and data transmitted over those networks will be 100% stored in India.

The government’s plans come after the likes of Android, from the Google stable, said it would cut ties with Huawei’s smartphones after the US government on May 21 barred the Chinese company’s products and also barred US companies from supplying software and components to that firm which makes telecom equipment as well as smartphones. The US has also been pressing India to bar Huawei from 5G, but New Delhi is yet to take a call.

“Look what happened to Huawei, their Honor (branded) phones,” the official said. “It was unthinkable, but now it has definitely rung alarm bells with us. Tomorrow, if the US finds us unreliable for some reason, all they need to do is ask their companies to slow down networks in India and everything here will come to a standstill. We are vulnerable and we must take steps to cover that.”

Huawei was forced to shift to Plan B in the face of the US ban, and is reportedly aiming to trademark its own OS – Hongmeng – in several countries to replace the Android OS. 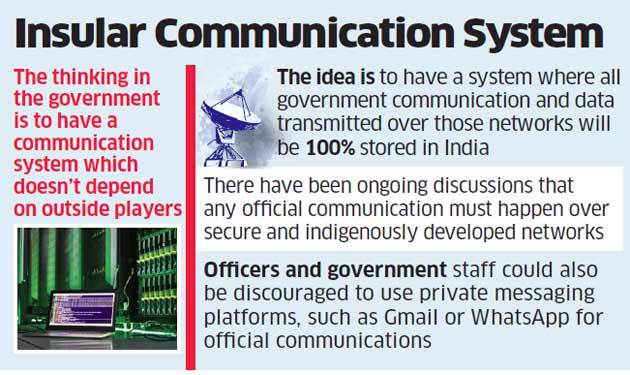 The official said all officers and government staff could be discouraged to use private messaging platforms, such as Gmail or WhatsApp for official communications. “Right now, officers use their private emails, etc. This needs to stop.”

WhatsApp, owned by US major Facebook, considers India its largest market with more than 200 million users. The social media platform though has been at loggerheads with the Indian government over the latter’s demands for traceability of messages, as part of New Delhi’s efforts to crack down on rumour mongering which leads to criminal acts such as mob lynching.

“The United States Trade Representative has already red flagged our proposed data privacy bill and the intermediary guidelines,” another senior official in the know told ET. “American companies are resisting our efforts of data localisation. These, coupled with the recent ban on Huawei, means the Americans can cripple us anytime they decide to.”

Under the proposed plan, at least all crucial data would stay in India, the second official said.