MUMBAI|KOLKATA: Reliance Jio Infocomm has started offering 30 minutes of free talk time to pacify customers unhappy about paying for calls made to other networks in an attempt to protect its subscriber base.

The limited-period offer — being made through messages to users recharging their packs — came less than 48 hours after Jio announced it will start charging for calls made to subscribers of other telcos to account for a 6 paise a minute termination charge it pays to rivals. “Customers will get free talk time of 30 minutes the first time they recharge their phones. This one-time offer will be available for the first seven days from the date the plan was announced,” said a person aware of the development. “This is a handholding exercise to help a smooth transition for subscribers.”

Jio, which announced the charge on October 9 with immediate effect, did not respond to ET’s queries.

Bharti AirtelNSE 1.44 % and Vodafone Idea swiftly swung into action to lure customers disgruntled with the Mukesh Ambani-owned telco’s decision. The move had prompted sharp criticism on social media, mainly on micro-blogging platform Twitter. Many users reminded Jio of its promise of free lifetime voice calls when it started providing services three years ago and threatened to port out.

The hashtag #ilovejio started trending soon after, leading to a meme war between those for & against Jio’s move.

Some users mocked the plan, which requires them to buy vouchers of Rs 10, Rs 20, Rs 50 or Rs 100 to make calls to customers of other networks. The telco, with over 350 million subscribers, said it is compensating for the charges by offering users additional data. 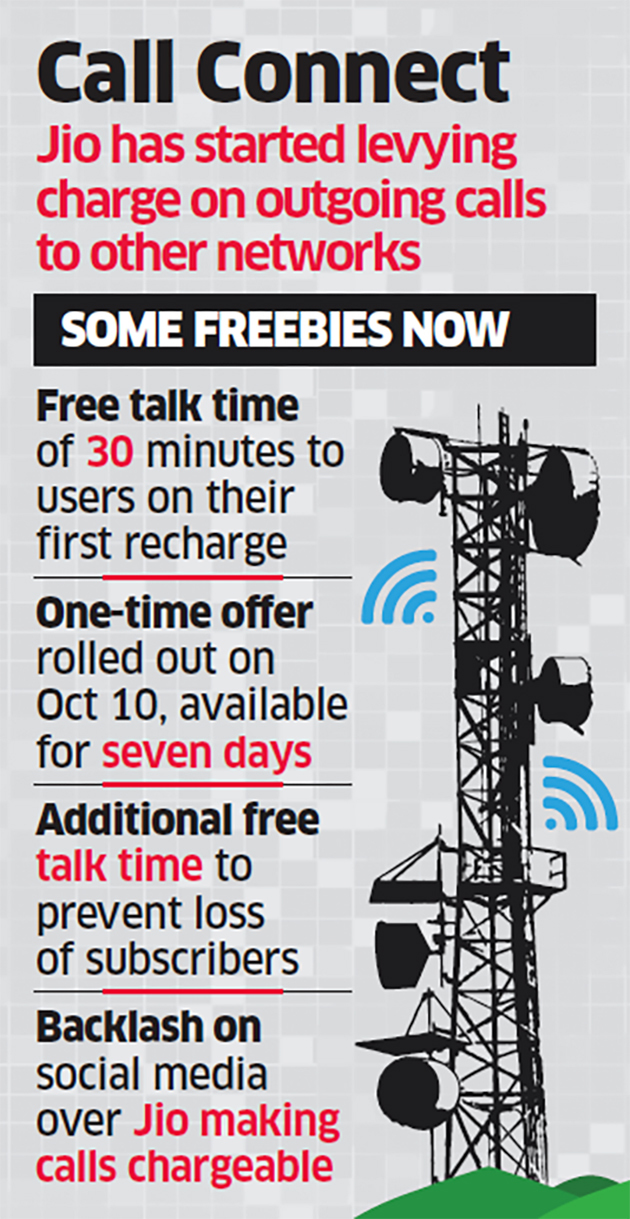 On Friday, Bharti Airtel and Vodafone Idea took the social media war against Jio up a notch, taking potshots at their rival and assuring their own users of continuity of their free unlimited calls.

Vodafone and Idea, in their respective Twitter posts, took a dig at Jio. Idea wrote, “Free calls on unlimited recharges. We truly mean it.”

On Thursday, after the initial backlash on social media, Jio, through senior executive Umesh Upadhyay, issued an eight-minute video on the platform to explain why the charge was levied.

The telco said interconnect usage charge (IUC) was supposed to be brought down to zero from 6 paise a minute from January 2020, but the regulator’s recent move to seek views on deferring the zero-IUC regime had created “regulatory uncertainty” and “compelled” it to levy the charge, equal to the amount payable for voice calls to other telcos.

Several Twitter users responded with their own videos, mocking Jio’s move and reasoning.

According to India Ratings & Research and CARE Ratings, the recovery of IUC will benefit Jio and help reverse a trend of falling average revenue per user (ARPU). However, it could also discourage users from calling subscribers of other telcos, resulting in lower voice traffic & limiting operating profit growth to 8-10%.